This photo makes me happy.  It seems to confirm that Gregory Peck was Atticus Finch.
Not only is To Kill A Mockingbird one of my favorite books, I've loved the film long before I discovered it was a book.  In fact, as I'm typing I can remember sixth grade Trevor taking home one of those Scholastic book order forms that teachers are always passing out.  "Hey dad, that movie we watched, it's also a book."  We had just moved to Germany, and I had just started in a new school, and had not yet made any new friends.  Harper Lee was one of my best friends in sixth grade.
Which also reminds me that the first quarter of sixth grade is the only time I ever got straight A's. 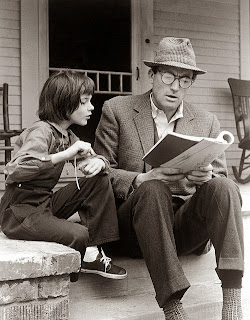 Gregory Peck rehearsing lines with Mary Badham.
Posted by Unknown at 8:57 AM 3 comments:

For about the past month I've been spending my Wednesday evenings playing Trivia at a local restaurant called Characters Quarters.  CQ is a typical sports bar type place; you don't go there for the food and comfortable seating.  But I like it because it's not a place where I think I'm expected to be and people with whom I'd normally hang out.
Back during the World Series I side saddled into a booth to watch the game.  I chose this place in case the Rangers were going to have a bad game and I might slip a word unbecoming of a pastor.  But on that given night some lady approached my booth and asked if I'd like to participate in the trivia competition.  I really wanted to give the ball game my full attention, but since there wasn't many people in the restaurant I thought I should at least participate.  So, hardly paying attention I came in fourth place that night, one point out of third place and the third place prize which would have covered my bill for the evening.
What?!  They give out prizes for knowing useless information?
I was hooked.  And I've been back every week since.
Okay, not every week, but definitely every week for the past month and a half.
Until a couple of weeks ago I would always bet way too many points on the last question and lose out on any prizes.  And the last couple of weeks I've come in third place.
Usually I've named my team, which has consisted of just me or me and a friend, something stupid like "I Know Stuff" or "Well What Do You Know" or " I Don't Know.  However, since the past few weeks I had been losing to a team called "Prestige Worldwide".  In case you don't know "Prestige Worldwide" is from a Will Ferrell and John C Reilly movie.
Well last night I went to trivia with the intent on sending that team a message that I meant business.  So I named my team "Shake-'N-Bake" which is from another Will Ferrell and John C. Reilly movie...that came first.  I wanted them to catch the reference and know that on that night they would be dominated my vast knowledge of useless information.
And not only did I beat them last night I also dominated a team called "Sex Panthers" which is a reference to another Will Ferrell movie.  Strangely enough "Sex Panthers" is a team made up of an older couple (60s?) and their adult daughter (late 20s) and her husband.  They were fun to chat with.
So now I am not only the defending champion of trivia, but I am officially in the league.  Quarterly they have larger contest which can result in cash prizes up to $5000.  That's amazing.  You can get paid to know useless crap.  This is totally for me.
Posted by Unknown at 11:08 PM 1 comment:

7 Billion is the new population of the world.  And it's continuing to grow.
This is having major implications on everything.  The environment.  The economy.  The political climate.  The medical fields.  The classrooms.  And even the church.
We must begin to think, and imagine, and create, and live, and give, and share, and move differently.  And isn't that exciting?